It is easy see why shore diving has become so popular. There are few activities that provide such freedom to explore and such immersion into the natural world. Many locales may contend for the title of shore-diving capital of the world, and Grand Cayman is, without doubt, up there with the best. 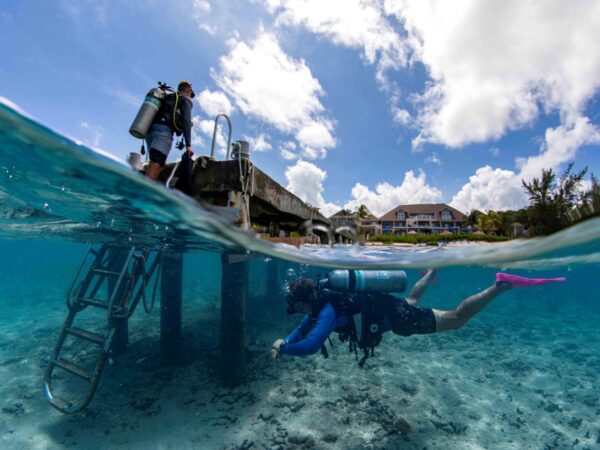 From the earliest fin-kicks of the recreational SCUBA industry, shore diving was one of the best ways to explore Grand Cayman’s stunning reefs, and so it remains true to this day. In many spots along the coast of this divers’ paradise, steps or ladders have been built directly into the rocky ironshore to facilitate access. Dive operators are often located mere steps from many reefs and some even have adjacent bars or restaurants where divers can unwind after a day in the water.

To celebrate the launch of Reef Smart’s Grand Cayman dive and snorkel travel guide and series of waterproof cards, we’ve compiled a list of our top shore-accessible sites. Let us know what your top 10 is in the comments below.

So, without further ado…let’s dive in!

10. Wreck of the Cali
If you’re looking for a simple shore-accessible wreck that’s packed full of life, then the Cali is for you. Located in the heart of George Town, Cali is just a stone’s throw from the public beach beside the fish market, from Rackam’s, or from the dive shop Divers Down. Cali was originally a turn-of-the-century sailing schooner that was refitted with a diesel engine and twin screws in 1926. She was transporting rice when she sprung a leak. The water-soaked rice expanded, rupturing the hull and sending her to the bottom. The wreck is pretty broken-up these days, but there remains a lot to explore at this site. Divers and snorkelers can usually identify many elements of the original ship, including the observation mast, engine block and a section of the stern, complete with rudder and lifeboat davits. The complex debris field supports many reef creatures, including tarpon, mutton snapper, Bermuda chub, porcupinefish, angelfish, wrasses, parrotfish and stingrays. 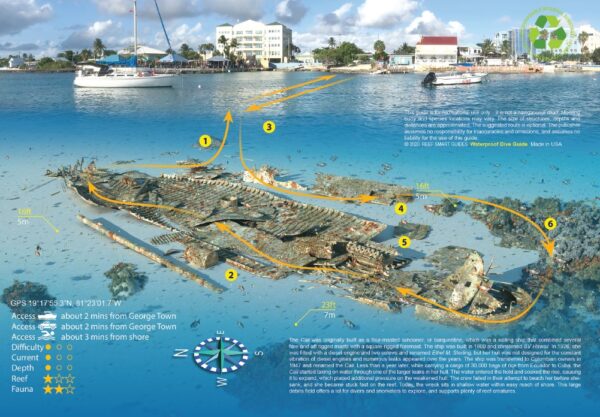 9. Soto’s Reef
The original and still one of the best shore dives on the island. Soto’s Reef is the spot where it all began when Bob Soto opened the island’s first dive shop in 1957. The site, which is blessed with simple access, decent visibility and virtually no current, is fascinating to explore whether through diving or snorkeling. Sometimes referred to as Cheeseburger Reef because of the nearby Burger King, Soto’s Reef is perhaps best known for its numerous swim-throughs, tunnels and caverns, which are often packed with tarpon and jacks. With a maximum depth of approximately 40 feet (12 meters), divers get a ton of bottom time here. It’s also a macro-photographer’s dream with an abundance of small cryptic species, like banded coral shrimp, arrow crabs and yellowhead jawfish, according to Lobster Pot Dive Center, which leads daily dives at the site. This site is availabe to own as a Reef Smart waterproof card.

8. Turtle Reef
This Northwest shore dive and snorkel site has a lot to offer beneath the surface, but it also packs a punch top-side with its buzzing post-dive entertainment. Access to the site literally takes divers from on-site operator, Sun Divers, through the Macabuca bar, which has steps that lead directly to the water. There’s a quality mini wall less than 200 feet (61 meters) from shore and stretch about 35 feet (10.5 meters) in height, which is where most divers choose to explore. But those seeking a deeper profile can head to the drop-off, located only 450 feet (137 meters) across the sand plateau, seaward of the mini wall. Divers can find stingrays, peacock flounders and hogfish, as well as sea turtles (as the name suggests). It is the tarpon that are most common at Turtle Reef, however. A large cave located just south of the entry point is a popular place to find these gentle giants hanging almost motionless in the water column. The site is also known to host schools of rainbow parrotfish.

7. Lighthouse Point
It is not a lighthouse that makes this spot famous, but Neptune himself. The 17-foot (5-meter) tall, bronze statue, known as the Guardian of the Reef, welcomes divers and snorkelers, and particularly underwater photographers, to the reef next to Divetech. And while the statue may be the first thing that springs to mind when you think about this West Bay site, it has so much more to offer. There’s a beautifully undercut mini wall that runs parallel to shore, which is packed with snapper, grouper, moray eels, lobsters and squid. Divers may also spot a number of small cryptic species, like seahorses, frogfish and sailfin blennies. From the mini wall, a line in the sand guides divers to the drop-off, which peaks at about 50 feet (15 meters) before dropping sharply to extreme depth. The wall is sliced and diced with numerous channels and swim-throughs and horse-eye jacks, eagle rays and sea turtles are a common sight. 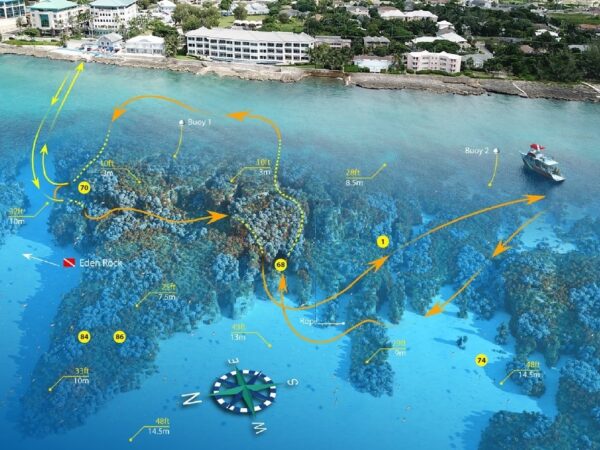 6. Eden Rock and Devil’s Grotto
These are the two dive and snorkel sites that put Grand Cayman on the world stage. While these adjacent sites are unique many ways, they also have certain similarities in their structure and species that mark them as siblings. Both reefs rise from the bottom to just 10 feet (3 meters) below the surface. They both also contain a complex network of winding tunnels and cathedral grottos that are jaw-dropping in their beauty. In the summer months, these labyrinths are often filled with dense schools of silversides and titanic tarpon looking for an easy meal. Eden Rock Diving Center is a nice easy spot to visit either site, and with a maximum depth of less and 50 feet (15 meters) there’s so much bottom time to explore these sites that you might be able to fit both into the same dive. This site is availabe to own as a Reef Smart waterproof card.

5. Anchor Point
Anchor Point is a deep wall dive located along the north shore of Grand Cayman’s East End, about 3 miles (4.8 kilometers) east of Old Man Bay. This secluded spot was once an anchorage for sailing ships that would unload on Barefoot Beach. Today, this beach is a great place to access one of the best wall dives in Grand Cayman. There’s an incredible swim-through that begins on top of the wall and exits the drop-off in an explosion of black corals and deep-water sea fans. Divers will find plenty of tiger grouper, mutton snapper, moray eels and lobsters on the wall, and reef sharks and sea turtles are also commonly seen. Shore divers can check out the sulphur vents in the shallows near shore, which produce an eerie greenish/yellow haze in the water. To the East of Barefoot beach is the wreck of SV Geneva Kathleen – a wooden-hulled schooner that sank in March 1930 that might also pique your interest.

4. Sunset House
Sunset House is the site that literally has it all – pristine stretches of reef separated by a wide sandy plateau, a wreck known as the LCM Nicholson, a giant ship anchor, a 9-foot (3-meter) tall bronze mermaid statue known as Amphitrite and, if all that wasn’t enough, there’s even an active coral restoration project on the northern edge of the site. Mutton snapper, barracuda and angelfish are common throughout the reef areas here, while hogfish, stingrays and conch are found in the sandy areas. This site can be dived in a multitude of ways, delivering a unique experience every time. As the name suggests, this is the house reef of Sunset House Dive Resort, which means access is about as easy as it gets and there are plenty of refreshments to consume on land, including arguably the best curries on the island. 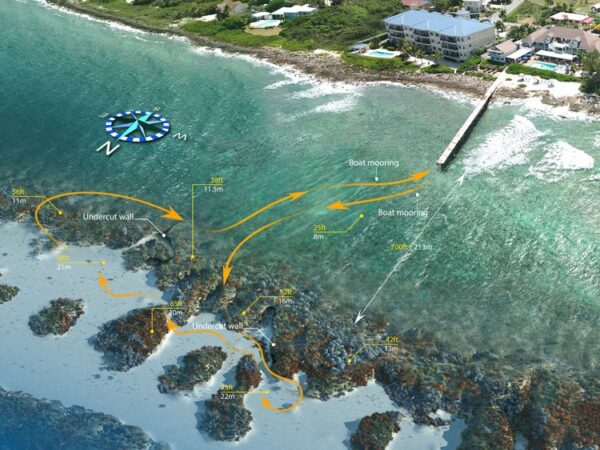 3. Cobalt Coast Reef
The Cobalt Coast Resort house reef is a real hidden gem – you literally never know what you might discover in this quiet corner of West Bay. The reef slopes very gradually away from shore for about 700 feet (213 meters) before dropping sharply at an undercut mini wall where large barracuda, snapper and grouper take shelter. Seaward of the mini wall is a sand plateau that stretches to the drop-off and is scattered with patch reefs. The habitat is about as pristine as it gets on the west side of Grand Cayman, with giant barrel sponges, seafans, star corals and the occasional elkhorn coral providing complex structure for a wide range of reef creatures. Triggerfish, including grey, Queen and ocean triggers, are too numerous to count on the sand plateau, while large macro fauna like eagle rays and hammerhead sharks have been known to pass through the site. With access to the adjacent Schoolhouse Reef and Lexau’s Legacy, there’s plenty to explore from this site. This site is available to own as Reef Smart wall art.

2. Hepp’s Pipeline
Ask local dive pros what their favorite shore dive is and you’ll likely hear them say Hepp’s. This West Bay site is simply stunning. It was named after Chuck Hepp – one of the industry’s earliest dive instructors – who is said to have discovered the site in the 1970s. The term “pipeline” comes from the shape of the mini wall, which rises over 30 feet (9 meters) above the seabed and is curved over at the top like a giant, breaking, barrel wave. The overhanging shape provides shelter for all manner of reef creatures, including squirrelfish, moray eels and fairy basslets. Large black corals, wire corals and gorgonians grow on the underside of the wall, and their branches often shelter seahorses and decorator crabs. Seaward of the wall, divers can often find barracuda and large black grouper cruising for a meal. The dive site is directly off shore of the Coconut Bay residential complex where Stingray Watersports is located.

1. Babylon
Everyone who visits Grand Cayman should aim to dive Babylon at least once. This legendary site is famous for its spectacular drop-off that resembles the diving at Bloody Bay Wall in Little Cayman. The sheer face begins at around 40 feet (12 meters) and disappears into the depths. There are numerous overhangs and undercuts along the wall, but the dominant feature at this site is the massive, sheer-sided pinnacle set just seaward of the drop-off. An impressive swim-through exists between the pinnacle and the wall, which shelters a dizzying array of black corals, soft corals and sponges. Babylon supports incredibly high biodiversity. Various species of snapper are found at this site, including mutton, dog and cubera, as well as black jacks, eagle rays, and reef sharks. While Babylon is considered by many to be shore-accessible, it’s undoubtedly one of the island’s more challenging sites to reach, and should only be attempted by experienced divers under ideal conditions (usually during the summer months only). The best way to access the site is to call one of the East End dive operators, like Ocean Frontiers, who run dives to this site on a regular basis. This site is availabe to own as Reef Smart wall art and as a waterproof card.

Well, that’s our top 10 list of shore-accessible sites in Grand Cayman. Do you agree? We’d love to hear yours!

You can learn more about these sites and many others in Grand Cayman from Reef Smart’s dive and snorkel travel guidebook (available on Amazon) and our series of waterproof dive and snorkel cards.

Remember to dive safe, and don’t forget that shore diving should only be attempted by experienced divers with navigational skills, particularly if unaccompanied by a professional guide. Shore diving sites with an on-site dive operator are generally safer to explore than those without. When shore diving, always remember the following: