Reef Smart has provided 3D underwater visuals for a special feature titled “The Top 10 Wrecks of Asia-Pacific”, which appears in the latest issue of Asian Diver Magazine. 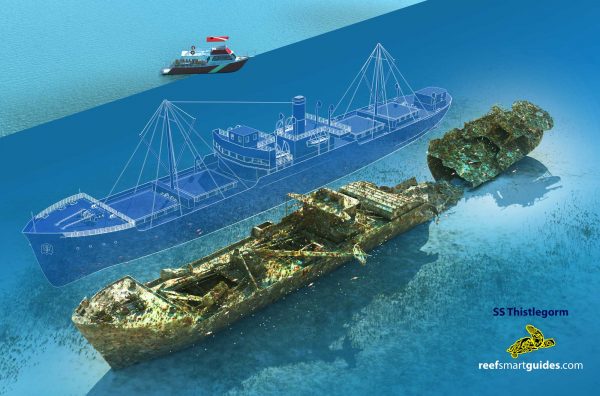 Models of SS Thistlegorm and Jake Seaplane, as well as a double page spread of The Hardeep, were created for the magazine, who called our work “eye-catching illustrations that inform and educate and are of value for any diver and business.”

SS Thistlegorm, which is a popular dive site as well as a war grave and museum, is one of our favourite wrecks. SS Thistlegorm was a British armed Merchant Navy ship that sank in 1941 near Ras Muhammad in the Red Sea after being bombed by the Luftwaffe. The wreck was discovered in the 1950s by Jacques Cousteau. The 128-meter-long ship takes multiple dives to be fully explored. Locomotives, tanks, motorbikes, rifles, trucks, and jeeps can all be found in this historical treasure chest.

“There are estimated to be around three million wrecks underwater. But for the majority of the population, these treasure troves remain hidden beneath the waves,” says Peter McDougall, Editorial Director of Reef Smart. “We want to encourage as many people as possible to explore the marine environment – it is our raison d’être – and we hope that our guides can enhance their in-water experience, improve safety and raise awareness of the coral reef ecosystem.”

Click here, to read the article in Asian Diver magazine.